How can we help you today?

There is now an easier way.  Do the following in a terminal session.

4) At this point many people say to "modprobe wl" to kick start the process... I throw in a reboot.

This method has worked, about, 50% of the time.

If you have a Broadcom BCM43142 wireless card in your laptop, you will have problems getting it working on the 2016.1 and 2016.2 versions of Kali Linux.

I've compiled, from many Blogs and message boards the way that has worked for me the most consistently and quickly.

*** NOTE:  You will need some type of network connection to do this installation. ***

First, we need to make sure you have a Broadcom BCM43142 wireless adapter in your laptop.

You can do that by using the command 'lspci'.

This will give you a listing of all PCI devices found on the system... even the ones that aren't working. 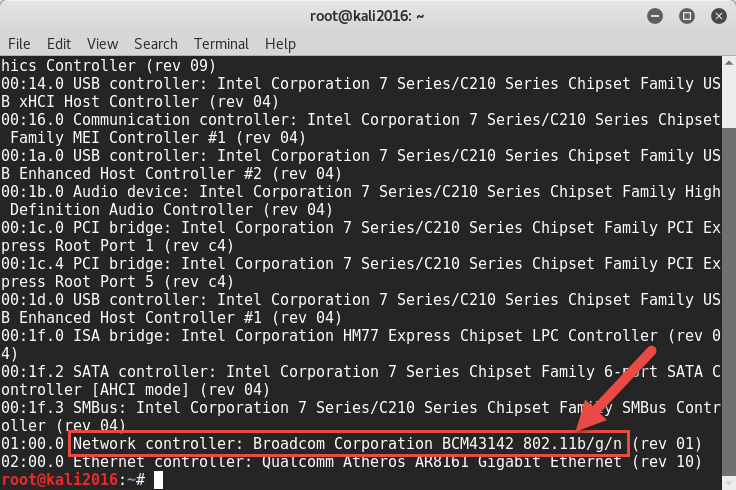 Once we have confirmed that you have the correct wifi adapter, we will need to do the following.

1- Do update and upgrade as always.  Type 'apt-get update && apt-get upgrade'.  This will update your system to the latest greatest for your release.  This will not upgrade your release.2- We need to install the headers.  Type 'apt-get install linux-headers-`uname -r`'.  This will install the kernel headers required for the driver install.3- We need to install a different package manager (this is the part that will simplify the driver install greatly).  Type 'apt-get install synaptic -y'.4- From within Kali, click on the 'all programs' menu button (the one on the bottom).  Type 'synaptic' and you will see the package manager.  Double click on it.

5- Within the Synaptic Package Manager type "bcm43142" and search.  You will see 3 options, they are:

Did you find it helpful? Yes No

Send feedback
Sorry we couldn't be helpful. Help us improve this article with your feedback.